As mentioned before, gases in diving cylinders are not only not sufficiently well approximated by the real gas equation but also the van der Waals equation, despite its prominence in thermodynamics teaching, is not doing much better.

Subsurface does better than this using a polynomial fit to table data for the compressibility of the three relevant gases. In a discussion at ScubaBoard, the question came up how to use this in gas blending. After an initial version using Mathematica, I sat down and implemented it as a perl script and hooked it up to this web page for everybody’s use and enjoyment. Here it is:

source code is on GitHub. Right now, it does only nitrox. But it computes instructions to up up partly filled cylinders with any pre-existing nitrox mix.

Let me know if you think extending it to trimix would be useful for actual use. I am not sure what the best user interface would be in that case: For nitrox, specifying the initial and target mix and pressure and two top up mixes, the blending problem generally has a solution. But with three gas components to get right, it is in general impossible with only two top up mixes. So you either have to use three (linearly independent) top up mixes or let one thing unspecified. That could be either the oxygen or helium fraction of the final mix or you have to leave open one of the gas fractions of the top up gases.

So what do you do in practice, which component do you leave unspecified?

Update: I updated the script so it can now also handle blending trimix (starting from a partially filled cylinder, you can specify three top up gases it will now calculated the intermediate pressures you have to fill up to). To blend nitrox, specify the target mix as containing no helium and leave one of the top up mixes empty.

Update: I discovered an error in the calculation (I calculated the mix according to pressures rather than volumes at 1 bar) that should be fixed now (April 10, 2022)

As for filling cylinders real gas corrections do matter, we try to take the compressibility factor into account in Subsurface. As the theoretical physicist I thought (as I was taught) this is handled by the van der Waals equations. Turns out, in the pressure/temperature range relevant for diving cylinders is very far from getting the corrections to the ideal gas equations right. There are errors at least in the 30% range. This is probably since we are quite far away from the tri-critical point where it is supposed to be a good approximation.

In the end, we found a cubic approximation with coefficients read off from tables of compressibility factors to be an economic way to do these computations. You can find the source here.

When today somebody asked in a diving forum for a spreadsheet to calculate the resulting pressure when streaming between two cylinders, I thought I could use these interpolations to do the calculations for real gases with different compositions. Here is what I came up with.

We have all learned that most of the time the ideal gas law (maybe in its isothermal version known as Boyle-Mariotte law) is sufficiently accurate to calculate the amount of gas in cylinders. At least as long as we restrict to pressures not exceeding about 200bar (and of course we all know it’s a beginner’s mistake to assume 300 bar cylinders give you a 50% advantage in gas carried with respect to 200 bar cylinders even forgetting the problems of actually getting those filled to nominal pressure or attempting to mix in at those pressures).

But let’s look at this a bit more quantitatively: You can parametrize the error of the ideal gas law by a “compressibility factor” Z so that it becomes

What is 3% amongst friends I hear you complain, that is likely less than the accuracy of your pressure gauge. That is of course correct but lets see how this relative error multiplies as soon as you take differences: Let’s say you want to compute your surface air consumption (SAC) for a dive in which you breath your cylinder down from 200 bar to 150 bar. Wrongly assuming the ideal gas law to hold lets you compute the amount of gas to be 50 bar times the volume of your cylinders. But as we saw, due to the compressibility factor, we should rather use 194 bar – 150 bar which is only 44 bar. Compared to the 50 bar of the ideal gas, we now have a 12% error, something that I would already consider significant. In particular when I use this value to extrapolate the gas use to other dives.

We see that suddenly the relative error multiplied by a factor of four and for the momentary gas use one needs to look at \(\partial Z/\partial p\) as well.

The upshot is that even for 200 bar one should better use a real gas replacement to the ideal gas law. Anybody who had been in an undergraduate physics class would now probably go to van der Waal equation but as it turns out for typical diving gases in the commonly used pressure ranges that gets 1-Z rather poorly. So for Subsurface we had to use a more ad hoc approximation. But that is the topic of a future post. 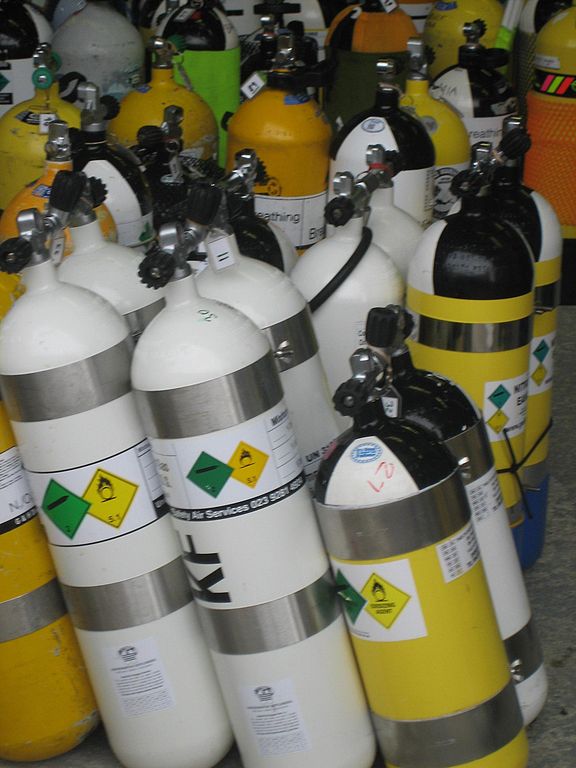